The Vigneri are all men and women who are originally from Mt. Etna, and many have been working with us for more than 25 years. Knowledge, this direct personal relationship – without intermediaries between us – is fundamental. The goal is to make “Human Wines”, carrying winemaking with respect for Humankind and the Environment.

Salvo Foti was born in Catania in 1962. In 1981, he started his oenological career as a consultant for renown Sicilian producers in Agrigento, Ragusa and Trapani. However, his current work is defined by Mt. Etna, where he participated in the birth of winemaking companies that today are leaders in this area. During his career, he has carried out numerous winemaking internships and courses in Italy and France. His commitment to the oenological sector has not always been only purely technical, rather he has extended his work to other areas, including the marketing of wines and scientific research in the oenological sector in collaboration with national institutes and universities. As a teacher, he has organised tasting courses and courses for sommeliers (ONAV, AIS, FISAR). He has been a freelance lecturer in oenology at the “Wine Manager” courses at Italian Professional Schools.  During his research work, he has published numerous studies and technical books on viticulture and collaborated with various newspapers in the wine sector.

Some of these publications include:  Methods of marketing viticulture products in the area (Thesis at the Department of Agriculture – University of Catania, 1987); Wine in the history of Sicily today, at table and with the consumer (CO.S.P.A. Edizioni, Catania, 1989); Pantelleria and its wines (Enotria, Milan, 1990); Study on the nature and content of certain classes of polyphenols of grapes produced in Eastern Sicily (Enotecnico, Asti, 1993); Wine in Calatrava (Etna Territorio, Catania, 1995); Wine tasting (L’Oculista Italiano, Catania, 1996); Aromatic Precursors present in some grapes of Eastern Sicily (Asti 1997); Etna. The wines of the Volcano (Catania, 2001-2005); How to Drink Well (Bonanno Publisher, Acireale, 2002).

THE GENERATIONAL CONTINUITY OF OUR COMPANY.

Simone Foti, Homo Etneus, was born in Catania in 1994. Following in his father’s footsteps, from an early age he showed a great interest in viticulture, accompanying his father among vineyards and wineries. After high school and after a harvest in California, he attended the prestigious wine school of Beaune, in Burgundy, where he graduated in 2018. He continued his international experience in Burgundy and in other areas of wine-growing France (Loire, Champagne, Jura) where he came into contact with the excellence of French oenology. Back on Mt. Etna, he is an active part of the family business where he deals specifically with the vineyards and winegrowing process.

Andrea Foti, Homo Etneus, was born in Catania in 1998.  Like his brother, he was born into the tradition. After finishing high school, he moved to Milan where he attended the State University, graduating in Viticulture and Oenology with full marks in December 2019. Back on Etna, he is an active part of the family business where he deals specifically with oenological aspects and quality control. 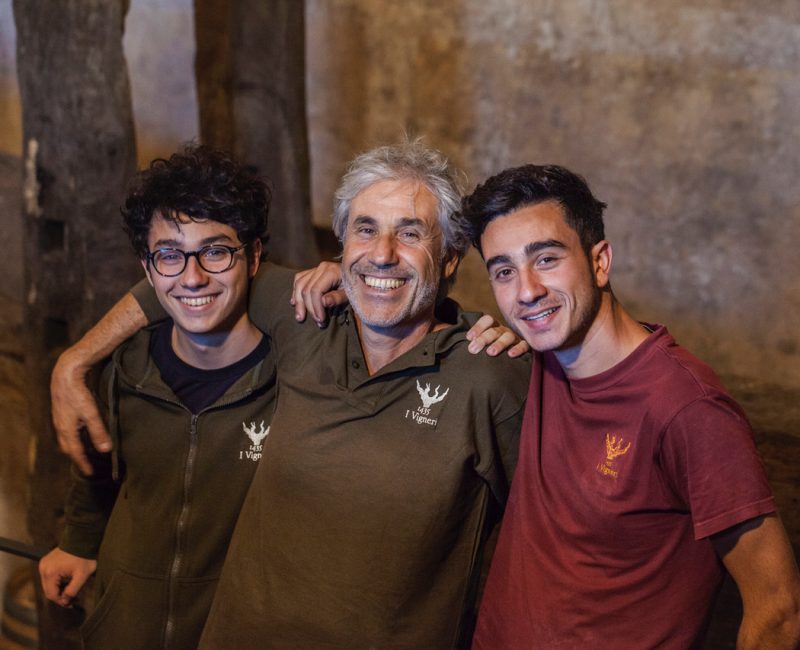 In addition to being a winery, we are a Guild – a tightknit group – of indigenous Etnean winegrowers. We have been working for more than 30 years on Etna and in Eastern Sicily. Our traditional work in the vineyard and winery has always been supported by small innovations, as well as by an anthropological, technical and historical research on the territory, all aimed at excellence. We use non-invasive tools and methods, with the utmost respect for tradition and our ancient vineyards. The basic spirit is the search for harmony, an organic approach, without rushing and forcing nature, in synch with what surrounds us: the Environment and Mount Etna, of which we feel part, not above or beyond. The production philosophy is: “Human wines produced by People for People with respect for People and the Environment”. The vineyards are located in three different areas of the Volcano and at different altitudes, in order to cultivate each indigenous grape in the specific place where it was selected or introduced in ancient times. Our winery is an ancient Etnean Palmento in lava stone where – as it has always been done on Etna – we produce our wine.

We prefer to define our wines “Human Wines” rather than “natural wine” or other labels. “Human Wine” is for us the continuation of the agricultural and viticultural practices of our ancestors, the use of the ancient agricultural system of the Alberello (bush-training of the vine) and the Palmento, paired with the sharing and harmony of work with our fellow workers and our family.  All of those working with us are originally from Etna and many have been working with us for more than 25 years. The knowledge, the direct personal relationship, without intermediaries, with each of our Man or Woman is fundamental for us. The goal of “Vini Umani” (Human wines) is to make wine while also respecting mankind and the environment.

All our wines are produced from well-defined plots, selected by us, many planted by ourselves, during more than 30 years of work. Each parcel or plot gives rise to a single label.

"Before making wine, or working and cultivating the vineyards, we must learn how to cultivate people".