Native vines have been selected to ripen in the area of origin in a period in which the external ambient temperatures are more suitable for a winemaking process without external energy input. 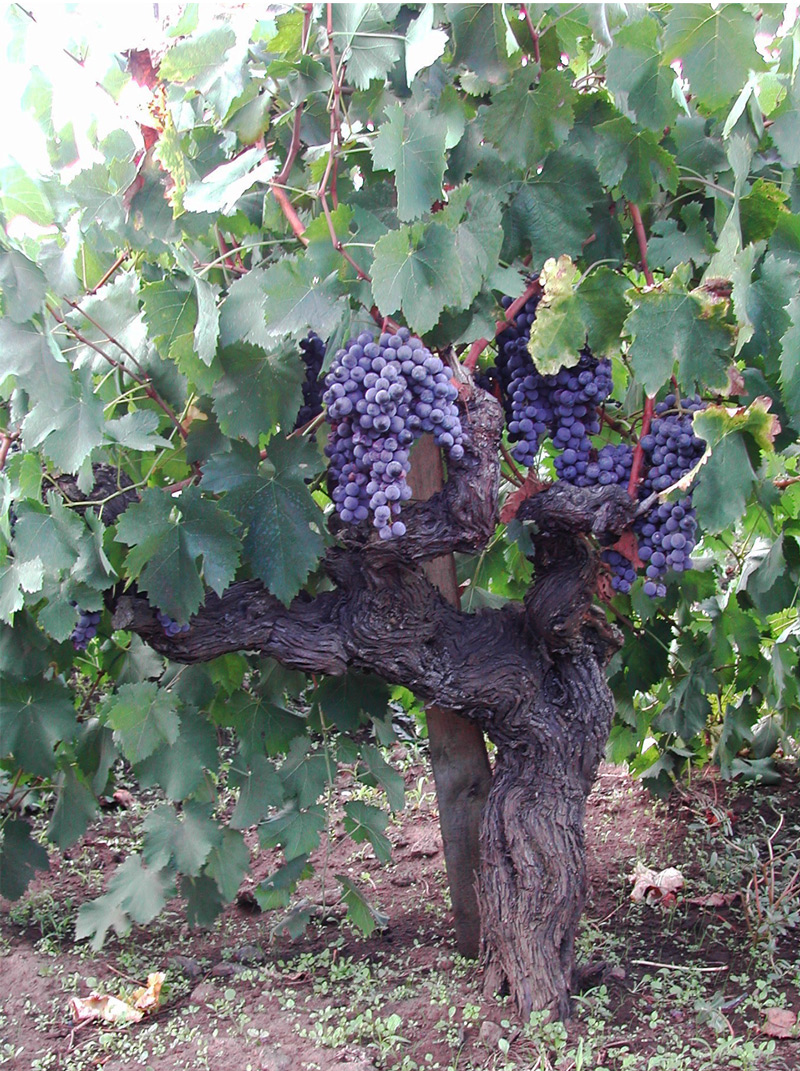 This red cultivar’s origin – historically the most widespread grape on Mt. Etna – is certainly the plain of Mascali, located on the volcano’s foothills and where this vine has been grown for at least four centuries. Today Nerello Mascalese is made up of a group of heterogeneous clonal populations. The Niureddu mascalisi or Niureddu, as Entean grape-growers call it, shows vigorous vegetation and production. This vigour is strongly conditioned by the vintage and weather, the area in which it is grown, the vineyard’s layout and system, as well as the vine density and how it is harvested and pruned.   With the same layout, pruning and cultivation, the climatic conditions during the summer, July-August, and autumn, September-October, can determine a noteworthy variability of the quality of the grape, not only between one vintage and another, but also for the same vintage depending on the slope of Etna and the altitude in which this grape is grown. The vine is often able – considering the sandy nature of this volcanic soil – to cope with water stress during the summer and plentiful rain in the period before and/or during the harvest. Full ripening is from early October and in some areas at the end of October, often coinciding with the beginning of the period of greatest rainfall in the Etna area.

In the 1950s, Nerello Mascalese was the most widely planted vine in the province of Catania. It is estimated that it was used in 67% of the area with wine grapes of the province, 37,000 hectares of vineyards, producing about 694,00,000 kg of grapes (from Mazzei, Zappalà). It has been grown almost exclusively in the Catania area and in the Messina area, and in the last twenty or thirty years it has become widespread in Palermo and in the Agrigento area, where it is mainly harvested using the marquee and espalier pruning methods.

Nerello Mascalese’s spread into these provinces, more than quality, is precisely due to its high productive vigour, enhanced by harvesting approaches such as the irrigated canopy “tendone” and espalier.

In the Etna area, we still plant new vines using American rootstock, which are subsequently grafted in February-March of the following year, grafted with Nerello Mascalese. Any vines that are dead or no longer produce fruit are usually replaced in August-September with bud grafting. 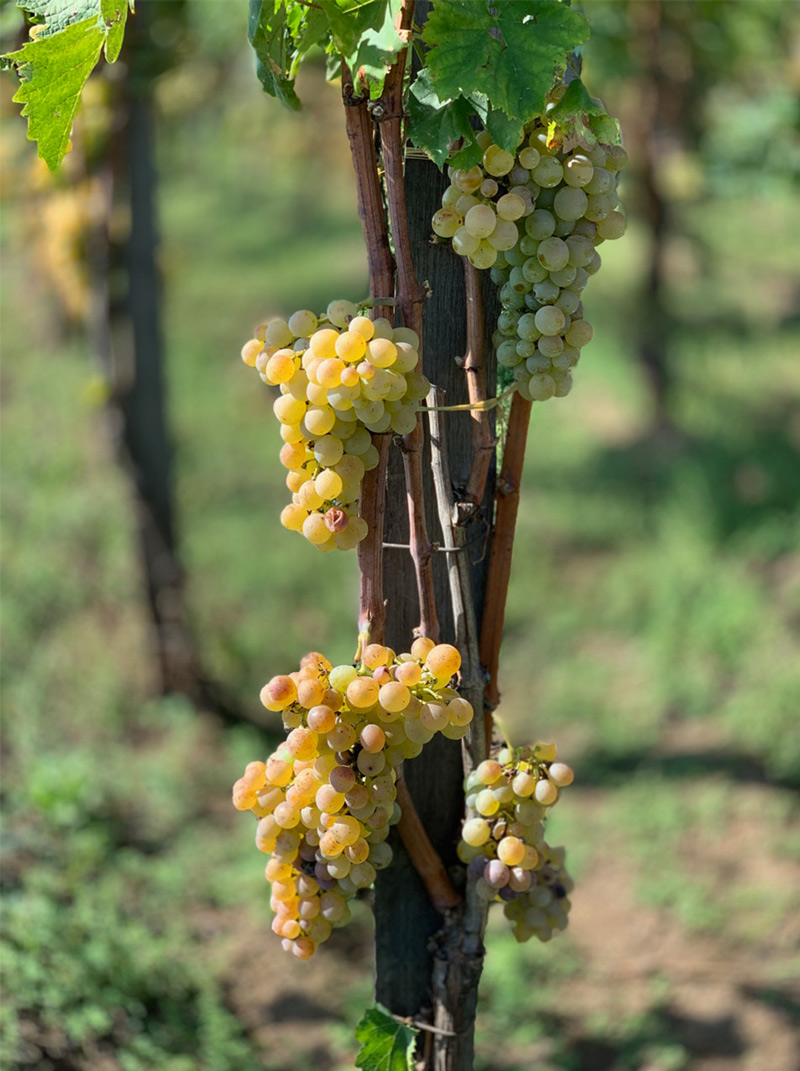 Until the 1950s, Carricante was the most widespread white grape variety in the province of Catania, occupying 10% (3,700 ha, 10,300,000 kg of grapes) of the wine grape area (Mazzei – Zappalà). It has always been exclusively cultivated in the Etna area.

Carricante (Carricanti) is also an ancient native vine of Etna, selected by the winemakers of Viagrande who have given it this name because of its constant and good productivity [In Italian, the word “carico” means full, or loaded]. It is a vine that has spread particularly in the eastern side of Etna, usually in the highest area where Nerello Mascalese poorly ripened or in mixed vineyards with the Nerello Mascalese and with the white grape, Minnella (another native cultivar).

Carricante is a vine that on Etna gives wines defined by a low content in potassium, high fixed acidity, particularly low pH (2.9/3.0) and a significant amount of malic acid, so that every year it is essential to carry out malolactic fermentation in this wine. In this regard, Sestini (1774) cited the use of vine-growers in the highest areas of Etna to leave the wine produced with Carricante in barrels on lees or yeasts (madre, or mother) so as to favour malolactic fermentation in the spring97 and also minimize the accentuated acidity (‘u muntagnuolu) that is typical of this wine. Around 1885, it was introduced in the province of Agrigento and Caltanissetta, but did not find success.

The approach adopted is the same as that of Nerello Mascalese, with some additional treatment against downy and powdery mildew (u malu u sulfuru). For this important autochthonous vine, we should also implement a program of recovery and clonal selection. 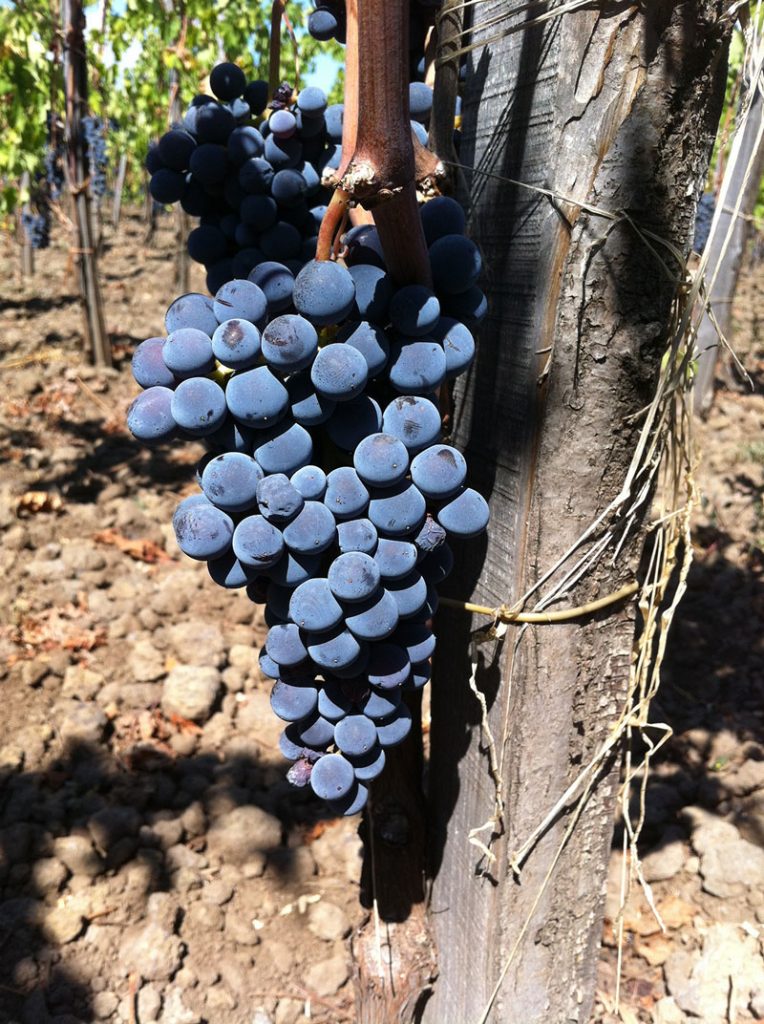 In Sicily the name of Nerello Cappuccio, or Mantiddatu niuru or Niureddu Ammatiddatu, is attributed to different vines that have a large “mantle” of leaves. [In Italian, “cappuccio” means “hood”]. The origin of this vine is unknown.

Around the 1950s, it was primarily grown in the province of Messina, where it occupied 5% of the vine-cultivated areas. In the Faro DOC wine area, in those years this vine occupied up to 30% of the vineyard area (Mazzei-Zappalà).

Based on the research work carried out on Mascalese and Cappuccio, both from the polyphenolic and aromatic point of view, significant differences were found between these two vines, which make them complementary and further justifying the traditional combination of these two varieties for the production of Etna DOC certified red wines. 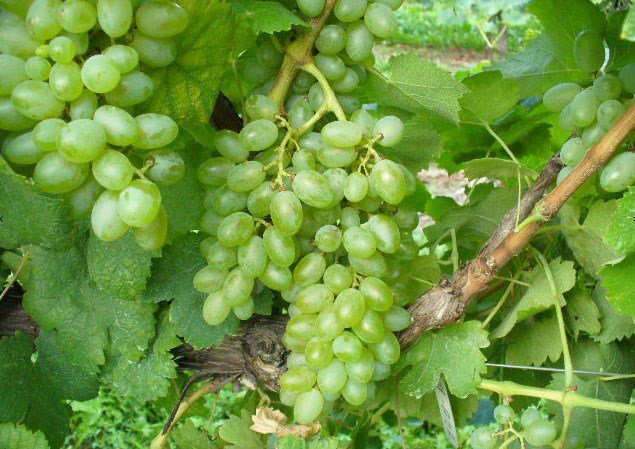 Passing through the vineyards of Mt. Etna, it is easy to find a white grape variety with a medium-large bunch and with its characteristic elongated berry: Minnella. It is an autochthonous vine that is grown only in the Etna region. It is generally found in old vineyards, intermingling with Nerello Mascalese and Carricante. Long ago, in small quantities, it was also cultivated in the province of Enna (Agira). The name Minnella (“Minnedda janca”) was coined by Etna winemakers for the unique shape of the berry, resembling a “minna”, which mean “breast” in dialect. There is no historical information about the origin of this vine. Minnella can be used for the production of Etna DOC up to a maximum of 10% together with Nerello Mascalese, Nerello Cappuccio and Carricante. It ripens between the second and third week of September, therefore earlier than the other native vines of Etna (the first 20 days of October).

"The safeguarding of biodiversity should be considered a primary value, as it is the essential condition for the future work of genetic improvement of plant and animal species. Only by drawing on a vast reservoir of genes will it be possible to meet particular, specific and changing needs over time."